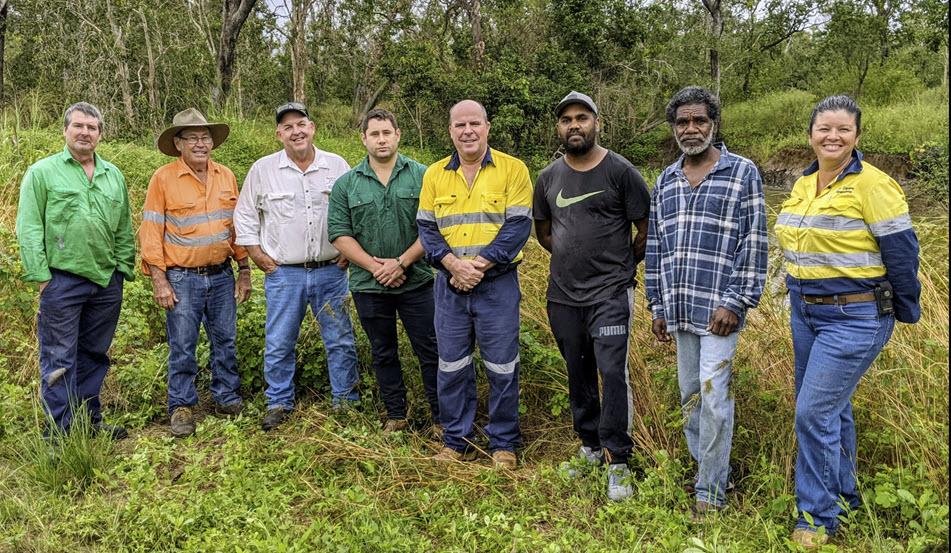 Amazon Frogbit (Limnobium laevigatum) is a freshwater aquatic weed that has been introduced to Australia via the aquarium trade. It closely resembles the invasive water hyacinth, but is significantly more virulent.

In 2016 Mareeba Shire Council Senior Lands Officer Sid Clayton noticed a floating mass of the plant at the Granite Creek weir in Mareeba. Investigating, he tracked the infestation back to a small tributary of Chinaman's Creek at a causeway where, apparently, someone had decided to empty their aquarium into the waterway.

MSC undertook eradication works that year and the year following and reduced the weed to almost nothing. But a lack of persistent funding meant that follow-up work could not be undertaken. By 2019 the original extent of the infestation had completely regrown and worse.

The weed is now firmly established in the Barron from the Granite Creek junction, through Kuranda, to Lake Placid.

A parallel outbreak has been identified and partially controlled in a tributary to the Tinaroo Dam. Numerous farm dams near Biboohra carry the weed.

All of these points represent a potential threat to the Mitchell as the weed can be easily transported by people and by waterbirds. In a big Wet, the waters of the Barron and Mitchell commingle at Biboohra. As long as the Barron is infested, the Mitchell is at significant risk.

Areas where Amazon Frogbit may get established

Based on what is currently know about this plant, the Amazon Frogbit has the potential to establish
and occupy the following wetlands throughout the catchment:

This is a floating plant of wetlands and slow-moving riverine areas and its impact will be concentrated on these habitats.

There is a handful of organisations concerned about this plant in both the Barron and Mitchell catchments. There has been steady support and leadership from Mareeba Shire Council (staff and Councillors), the Muluridji people, SunWater,  and the land care groups.

Key land managers on the Mitchell have come together to take action. There has been no substantive assistance from State or Commonwealth governments, and this weed doesn't wait for bureaucracy.

Money has to be invested in the fight to keep Frogbit out of the Mitchell starting right now. The effort has to be funded for the next several years until we beat it.

Rather than complain and point fingers, key land managers have reached into their own budgets and are providing much-needed additional funds for a Sentinel Network that can protect the Mitchell while the bigger issue of cleaning up the Barron gains traction.

The Mitchell River Watershed Management Group put up $10,000 of its own funds as a matching challenge to get the process started. See our list of donors, below, who deserve special recognition for their generous cash donations. All donations are tax-deductible.

The funding will be used to pay an inspection and control team to thoroughly check each Sentinel site 4x times per year. This activity is coordinated by MSC Senior Lands Officer, Sid Clayton. Sid is the person who originally spotted the weed, identified it, and led the initial round of eradication effort.

On the Barron, the prevailing view is that a combination of actions are needed, including:

As long as the Barron is infested, the Mitchell will be constantly under threat.

Related News for this Project

Mitchell River have produced an awareness-raising brochure that features a map of the Amazon Frogbit Sentinel Network.